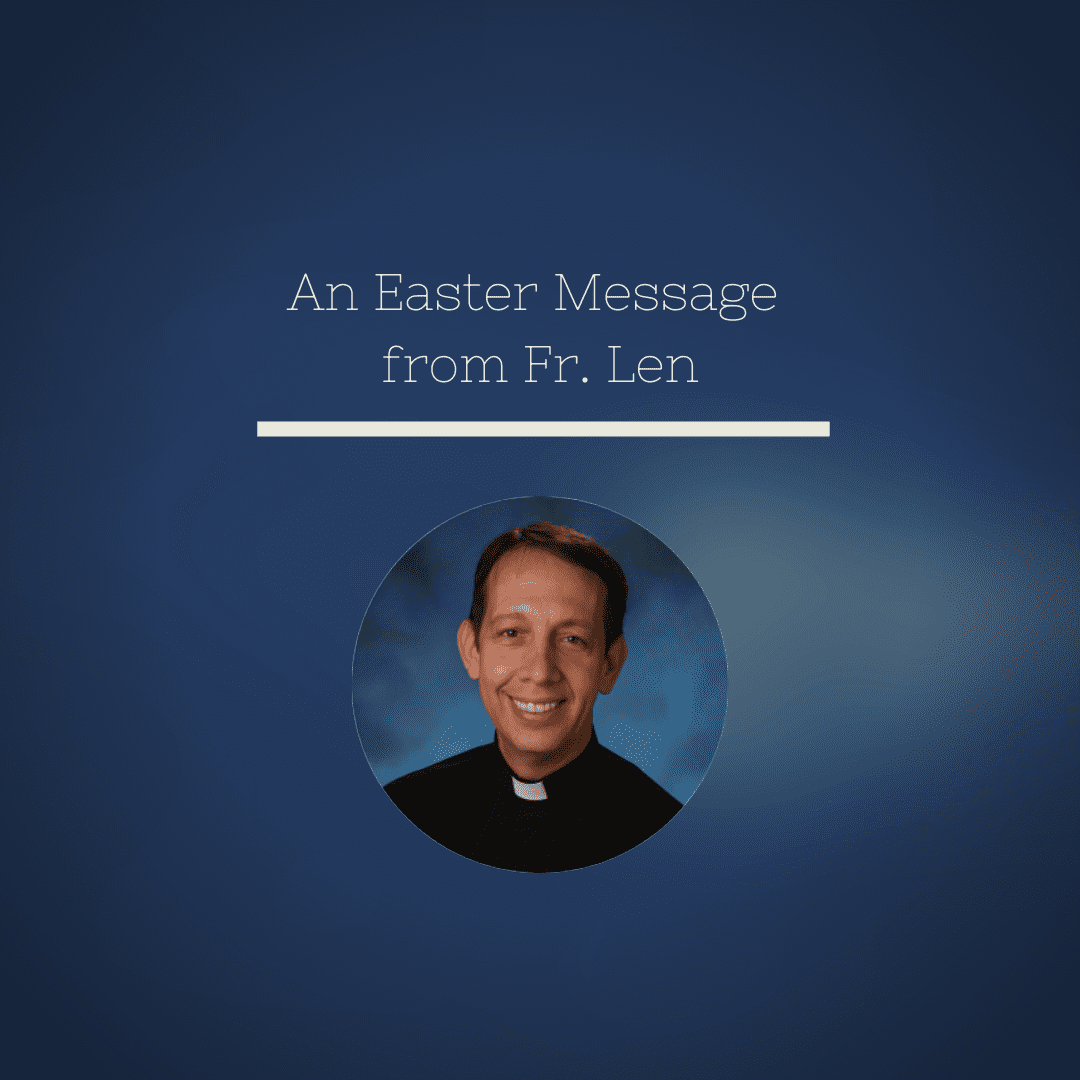 Happy Easter! It is interesting how much difference a year makes. Last Easter was the first weekend that we opened up all of our pews for seating (no more ugly blue tape) and there was great hope that things were finally getting back to normal. In fact, the Carnival, just a few days later, was an amazing success as it seemed as though all of South Tampa came! While there have been some ups and downs of infection rates over the past year, I think it is fair to say that the vast majority of Americans are no longer actively worried about COVID19. Instead, other man-made threats such as inflation are probably a more immediate concern to most. Yet, while we all experience “pain at the pump” that, of course, is nothing compared to the pain that the Ukrainian people continue to suffer because of the unjust Russian invasion they have had to endure. The brutality of this assault is heavy on our hearts even as we gather to celebrate Easter this year without such threats.

Aside from our prayers and the opportunity to financially support relief efforts, there is little that most of us can do. Nevertheless, I hope that we take this opportunity to reflect on the many blessings that we have and too often take for granted. None of us have to worry about bombs raining down on our Easter brunch. None of us risked life or limb to emerge from a bomb shelter just to come to Easter Mass today. We all know that there was a time, early on in the pandemic, when public masses were suspended, when priests were not admitted to hospitals to minister to the dying, when the reception of Holy Communion was not possible and most everyone had to settle for watching mass online.

A few months ago, I received an email from a relatively new parishioner who shared with me his faith journey over the last few years.

It so moved me that I want to share at least part of it:

“I am a fairly new Catholic having been received into the Church four years ago this Easter. My journey into the faith was a long blind struggle that only upon reflection looks beautiful to me because I can see God’s hand in so many things that happened to me that led me to His Church. Once safely in the Church, I learned complete love. I have people who love me and I have people I love. Each love is slightly different. My wife vs my birth son. My birth son vs my adoptive son. All love but all slightly different and therefore teaching me something different about love. But upon entering the Church, I for the first time began to understand what all-encompassing love is. Fr. Andrew’s recent homily summed up what I had learned, Agape – the fullness of love which can only be found in the Church.

Then one day it was taken away. Agape died. The strength that I received through the Eucharist was gone. I was lost, so very lost and it hurt, hurt so very much. To even think about this, I can still feel the pain. There was no church…Easter was cancelled. Easter, when Jesus teaches us that there is no death. Easter was cancelled because everyone was afraid of death. We were given Mass on TV instead, like something out of the 1953 dystopian novel Fahrenheit 451.

Two weeks to flatten the curve led to months. Churches started to open back up, but lots of people weren’t going because the bishops said they could watch mass on their tv’s in their pj’s while drinking coffee. We didn’t even do that as watching the mass was missing the central feature of the participation of the sacrifice in the Eucharist. We didn’t go back until Christmas. We were visiting Panama City Beach when I felt God speak to me, asking me to come back. We found a church and begged the priest to give each of us the Sacrament of Reconciliation as we had missed the scheduled day and time. He did and we went to Mass having not been for about ten months. I think I cried that entire mass.”

This email really struck home with me. I remember last year’s Holy Thursday mass being overwhelmed with emotion, recalling how the year before, I celebrated Holy Thursday mass in the rectory chapel with just my two fellow priests. To see all the people in the church yearning for the Holy Eucharist was one of the most memorable moments of my priesthood. I felt that this must have been what it must have been like for my relatives in Poland when they were able to finally have mass again after nearly five years after having their church destroyed and their priest executed by the Nazi’s.

Easter is a time not just of new hope, but in fact the greatest hope – for Jesus Christ is indeed Risen! The pain of suffering, the ugliness of hatred, the oppression of unjust leaders, the betrayal of those we trust, the separation and isolation that comes from sin, the thirst for vengeance…all of those things are overcome by Jesus’ death and resurrection! I cannot predict what will happen this year, but I know that God will never abandon us no matter what! He promises to be with us until the end, why then would we ever ignore or abandon Him? Knowing what God has done for us and what He offers us, why would we ever choose leisure, or lunch, or sports, or chores, or homework, or vacation over God? What will you choose? It is the choice between life and death!